DIY Dryer Repair – It Went Thunk! Then it Went Clunk!

DIY Dryer Repair – It Went Thunk! Then it Went Clunk!

IT WENT THUNK! THEN IT WENT CLUNK!

If you own a tool box and know how to use the tools inside of it, chances are you have had a friend or relative call you up and ask you to come over and fix something and upon arrival you realize they have already tried – and failed to complete the repair.  This was the case for me a few weeks ago when my mom called and invited me over for dinner.  For those of you not familiar, my mother is the queen of getting things done by other people; she can even make you happy that you “volunteered” to do whatever it was she wanted done. 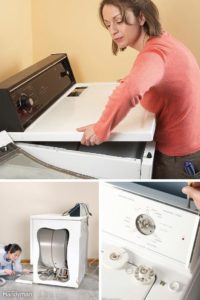 I arrived promptly 15 minutes late for dinner and was surprised to find that mom had invited more guests to the table.  As I sat down, one of the guests was explaining to the rest of the table that they would have to go out tomorrow and buy a new dryer because something went terribly wrong with theirs early that day.   In an attempt to be polite, I inquired as to the fate of their dryer and was told that in an attempt to “get at” some built up lint in the back of the dryer (you could see it sticking out of those holes) they had decided to remove 3 screws located on the inside of the dryer and on the back of the rotating drum.  After the third screw was pulled out the drum “fell” and made a solid “thunk” noise when it came to rest.   Realizing something had gone wrong but not knowing exactly what they decided to remove three more screws from the inside of the dryer and on the back of the rotating drum.  Once again, after the removal of the third screw the drum fell again only this time it made a much louder “clunk” noise before coming to rest.

“That’s terrible” would be the most common response given by most people to a story such as this; I am not most people.  I offered to stop by the next day and have a look at the dryer that made the mysterious noises.  I think I saw my mom smile!

We were able to vacuum up a lot of lint that was discovered under and around the back of the drum and would not otherwise been able to get to.  So, I suppose we did solve a small fire hazard.

The moral of this story is simple, if you don’t plan on looking at the owner’s manual (assuming you know where it is) at least take a moment to run a Google search on whatever it is you are planning to take apart so you can see what mistakes have already been made and avoid them (what fun is it to make someone else’s mistake)?

Although Sunset Builders & Maintenance does not actually repair washers and dryers, we are here to serve most all home maintenance and repair needs and would be happy to offer advice or referrals with regard to any project outside of our scope of services.

Contact Sunset Builders & Maintenance today for a consultation on your next project.

About the Author: Marc Arnett

Owner and operator of Sunset Builders & Maintenance, LLC, Marc Arnett is a Certified Building Contractor with over 16 years in the building industry. Marc is striving to grow a company that fosters, develops and values honesty and integrity, and a strong commitment to "do the right thing".